I am writing on behalf of the members of the Fraternal Order of Police to advise you of our continued opposition to the recently re-nominated Gigi B. Sohn to serve as a Commissioner on the Federal Communications Commission (FCC).

Following her re-nomination, media coverage has focused on her endorsement by previous chiefs of the FCC’s Public Safety and Homeland Security Bureau. The media’s breathless coverage and undimmed enthusiasm for the nominee is missing a key piece of critical information—all of them served in Democratic Administrations. Democrats endorsing Democratic nominees is hardly news. In other news, the nomination is generally supported by most, but not all, Democratic members of this Committee.

The FOP remains very concerned that Ms. Sohn played such an active role as a board member of the Electronic Frontier Foundation (EFF). We are particularly troubled by their, and by extension, her, forceful advocacy of end-to-end encryption and “user-only-access”—often referred to in the law enforcement world as “going dark.” New encryption methods for communications are causing Federal, State, and local law enforcement agencies to rapidly lose the capability to obtain information necessary to protect the public from crime and violence. Because service providers have embraced encryption technology that makes the encrypted data completely inaccessible—even from the providers themselves, law enforcement agencies are prevented from obtaining historically accessible information, making it extraordinarily more difficult to protect the public, investigate crime, or prevent imminent violence.

For years, the FOP and other law enforcement organizations have urged the Federal government to develop and adopt standards for carriers so that they can lawfully comply with law enforcement requests, especially when lives are on the line and time is of the essence. We are apprehensive of Ms. Sohn’s stance on this issue based on her leadership role at EFF and because she has never moderated her extreme views on this subject.

We have worked with three consecutive Administrations and numerous Federal law enforcement agencies, including the Federal Bureau of Investigation (FBI), to address this issue. As we noted in our letter last month opposing Ms. Sohn’s initial nomination, Christopher Wray, Director of the FBI, testified before the House and Senate Homeland Committees last September at a hearing entitled, “Threats to the Homeland: Evaluating the Landscape 20 Years After 9/11” and devoted a part of his testimony to what the law enforcement community calls the need for “lawful access.” He stated:

What we mean when we talk about lawful access is putting providers who manage encrypted data in a position to decrypt it and provide it to us in response to legal process. We are not asking for, and do not want, any “backdoor,” that is, for encryption to be weakened or compromised so that it can be defeated from the outside by law enforcement or anyone else. Unfortunately, too much of the debate over lawful access has revolved around discussions of this “backdoor” straw man instead of what we really want and need.

Director Wray highlighted the need for lawful access in cases like the killing of three U.S. sailors at Naval Air Station Pensacola. Following the attack, the FBI was unable to access any information from the terrorist’s phone and other devices for months because the service providers employed “user-only-access” technology and the phone used an app with end-to-end encryption. Despite lawful search warrants and the potential that additional attacks were imminent, it took the FBI months to retrieve that data from these devices.

Director Wray also noted that this was not just a Federal law enforcement problem, nor is it just a national problem. It is the policy of the United States that technology
companies should have the means to comply with lawful orders or requests for information. In July 2019, the governments of the United States, the United Kingdom, Australia, New Zealand, and Canada issued a communique which states:

[T]ech companies should include mechanisms in the design of their encrypted products and services whereby governments, acting with appropriate legal authority, can gain access to data in a readable and usable format. Those companies should also embed the safety of their users in their system designs, enabling them to take action against illegal content.

Technology companies have responsibilities when it comes to public safety, and which include cooperating with lawful and legitimate law enforcement orders, but the EFF has been the leader in the effort to thwart lawful access to digital data and evidence. Based on the fact that Ms. Sohn holds a leadership position with the EFF, we have no
confidence in her ability to objectively perform the duties of an FCC Commissioner.

In view of the foregoing, it is not surprising that Ms. Sohn has not gotten any support from within the law enforcement community. It is true that she has been endorsed by three people who previously held positions with “law enforcement” in their titles, as well as the trade associations representing 911 call centers and doorbell camera manufacturers. All of these are well-meaning and reputable parties, but hardly representative of those whose job it is to prevent crimes or solve them.

It is important that there be an understanding of Ms. Sohn’s general opinions on law enforcement in America, and with the ubiquity of social media comes a veritable treasure trove of tweets, retweets, and other communications passed on by her which we assume reflect her views or endorse the sentiments contained in the messages.The following are but a few examples: 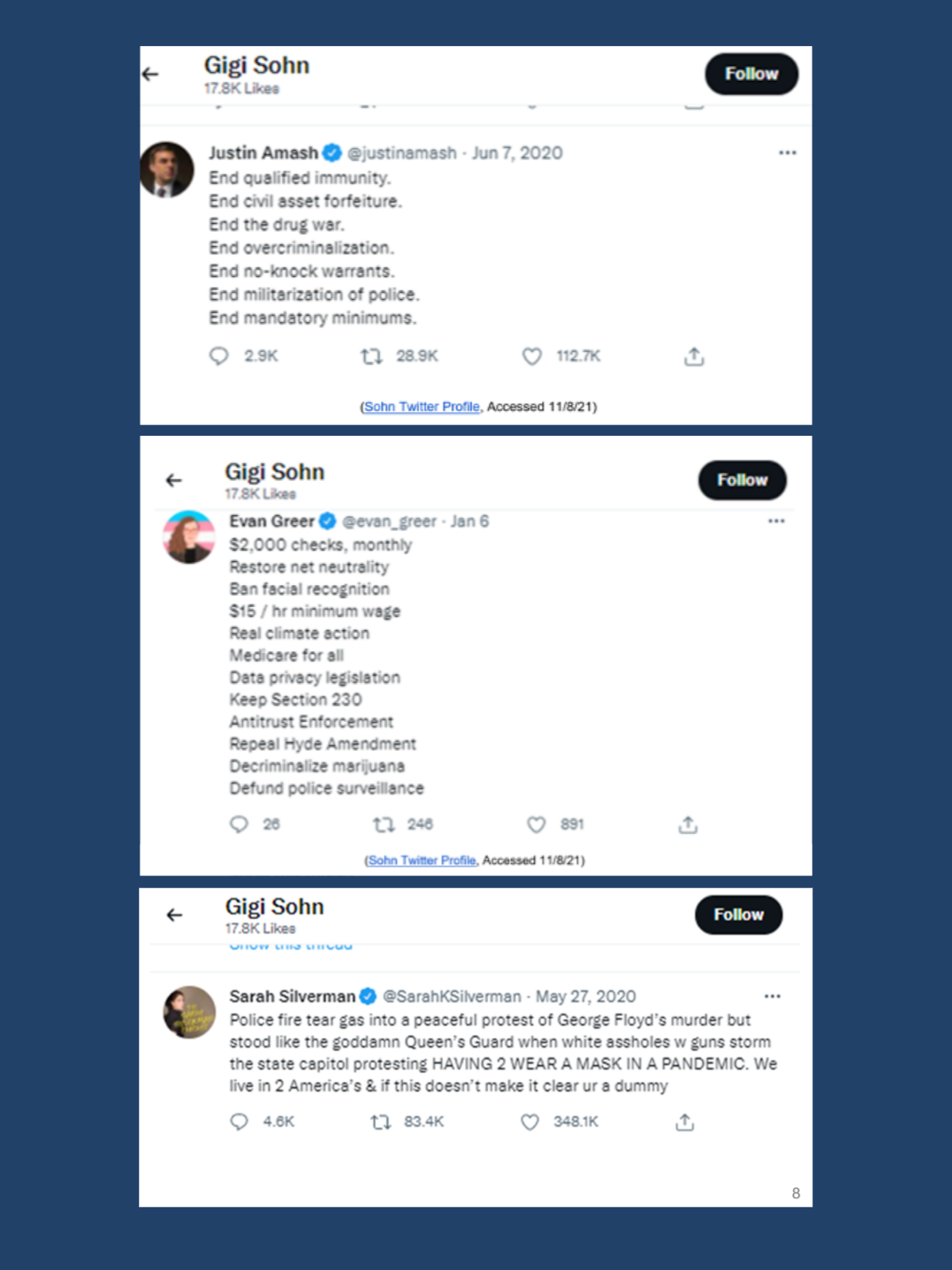 It is for these reasons that the FOP continues to oppose this nominee. We urge you and the members of the Committee on Commerce, Science, and Transportation to reject the nomination of Gigi B. Sohn to the FCC.

On behalf of the more than 364,000 members of the Fraternal Order of Police, I thank you both for considering our views on this nominee. If I can provide any additional information on this matter, please do not hesitate to contact me or Executive Director Jim Pasco in our Washington, D.C. office.

The Voice of Our Nation's Law Enforcement OfficersSince 1915