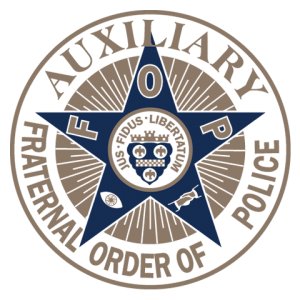 In 1920, a group of wives of Pittsburgh, Pennsylvania, police officers gathered to discuss issues concerning their husbands and their jobs. This was the birth of the first “FOP Ladies Auxiliary.” In 1941, Kathryn M. Milton became the first national president of the Ladies Auxiliary. Since that time the Auxiliary has grown to over 1,900 members in 100 subordinate Auxiliaries representing 28 states.

In 1985, membership eligibility that originally allowed only females as members was extended to family members (18 years of age or older) of any member of the Fraternal Order of Police. In 1987, the name of the organization was changed, dropping the word “Ladies” to reflect the growth in membership of the organization.

In August 2021, the Grand Lodge Auxiliary convened for its 40th Biennial Conference in Indianapolis, Indiana.

Although, on an organizational chart, subordinate auxiliaries are the lowest on the echelon of the Order, they are the most important in the structure of the Auxiliary. A subordinate auxiliary is formed with permission from the parent FOP lodge and the minimum of 10 eligible persons. This grassroots organization administers to day-to-day problems of the members of the Fraternal Order of Police and their families. The profile of a subordinate auxiliary varies with the needs of each particular police family, law enforcement agenda, FOP lodge, and community. Auxiliaries represent diverse interests and makeup of members.

Membership in the Auxiliary Offers…

The National Auxiliary has been a supporter of Easterseals for many years. Every year the Auxiliary raises funds and donates many volunteer hours to promote Easterseals.

The National Auxiliary’s Scholarship program is open to all Auxiliary members and their children and grandchildren. Each year the Auxiliary will award two scholarships from the persons who apply.

The National Auxiliary keeps advised of what is happening in Washington that will affect the law enforcement community. Auxiliary members are sometimes asked to communicate our support of or concern about a particular bill.

Rebuild, Encouragement, Assisting, Caring, Healing (REACH) was formed to assist families of officers who are injured on the job. One of the many purposes of this project is to prepare a bag of items that a family may need when they are called to the hospital when their officer is injured.

The National Auxiliary adopted this worthy charity several years ago. Every year the Auxiliary raises money and donates many volunteer hours to promote Special Olympics.

The National Auxiliary now provides monthly training sessions via Zoom on many aspects of the Auxiliary. Some of these sessions are directed towards a specific lodge office in order to assist State and Subordinate Auxiliaries. Other training sessions focus on specific programs and events of the...