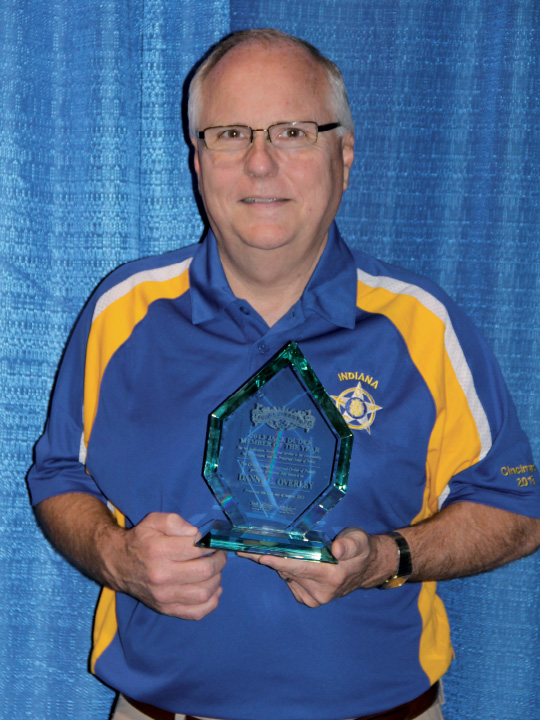 Danny Overley, a member of Indianapolis Fraternal Order of Police Lodge #86, was awarded the Jack Dudek Member of the Year Award at the National Biennial Conference held in Cincinnati, OH, August 12-15, 2013.

Danny joined the Indianapolis Police Department and the Fraternal Order of Police in 1969. He worked his way up through the ranks, achieving the rank of Assistant Chief. Retiring in 1994, Danny has never stopped working for his lodge or department.

After retirement, Danny began work with the Professional Police Officer Credit Union and has been instrumental in the growth and development of that organization. He has also worked closely with the Concerns of Police Survivors, holding a position on their Advisory Board; his local pension board, and the Indiana FOP Foundation.

Danny also was the founding chairman of the Indiana FOP Critical Incident/Memorial Team. He worked tirelessly to form an organization that takes care of the law enforcement family as well as survivors of a critical incident or line of duty death. He has even worked at the National level, chairing the National FOP’s Critical Incident/Memorial Team. Through Danny’s hard work, this is a priceless benefit, should any officer or officer’s family encounter this unspeakable situation.

Despite retiring, Danny has continued to work tirelessly for the benefit of police and their families. Not only does he spend time locally but nationally as well. He is an inspiration for all and we are grateful for all his hard work.

Congratulations to Danny Overley for this honor!