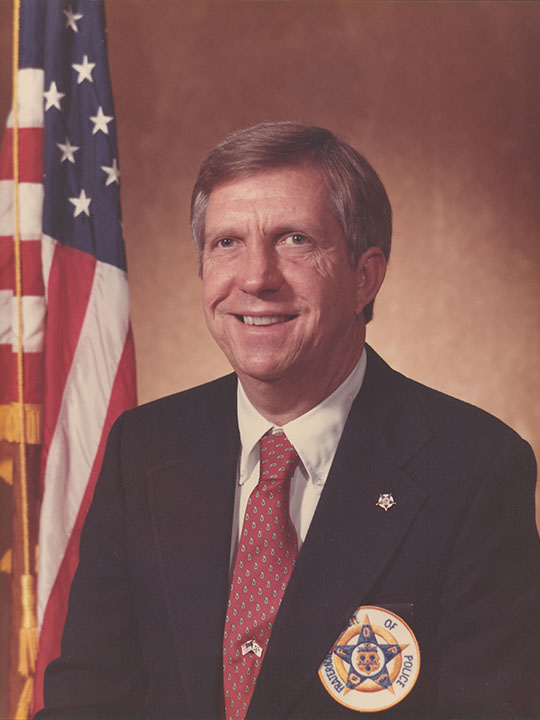 At the 52nd Biennial Conference held in Virginia Beach this past August, the National FOP presented the Jack Dudek Member of the Year Award to Paul D. “P.D.” Taylor, President of Lodge 123 in Oklahoma City. This award is given for dedication, loyalty and service to the community, his department and the Fraternal Order of Police.

P.D. Taylor was selected out of 270,000 members nationwide. He was joined on stage for the presentation by Carolyn, his wife of 18 years, and two of his daughters, Lindsay and Mandy. His other daughter, Kim, was unable to attend. Chairman of the Member of the Year Committee Leo Marchetti read just a few of his many accomplishments in working with retired and active police officers.

P.D. has served as President of Lodge 123 since 1984 and will be a 26 1/2 year veteran upon his retirement in February 1997. He holds the rank of Police Sergeant. Under P.D.’s FOP leadership, Oklahoma City police officers’ wages have increased, making them the #1 lodge in the country (since 1988) in percentage of pay raises, going from entry pay in 1984 of $1,129 monthly to $1904.04 in 1993, and it increases to $2,115.84 after graduation from the police academy. They are currently the only police department in the state of Oklahoma that still gets their health care insurance paid at 100% and the only one in the state that has up to $10 million of liability coverage, compared to $100 thousand in coverage in all other cities and towns across Oklahoma. They have won 98% of all Grievance Arbitrations, not counting the multitude of grievances that have been resolved by working with the Chief and have gone to Interest Arbitration twice over contract disputes, winning both of them.

Also under his guidance, Lodge 123 was a big part of the passage of a Police & Fire earmarked 3/4 cent sales tax increase in 1989. He has been instrumental in negotiating a College Tuition Reimbursement program, an increase in clothing allowances from $450 to $1,800 a year, an increase in accumulated sick leave and vacation time, skill incentive pay for Field Training Officers and Investigation Training Officers, a Sick Leave Exchange program and very importantly, an off-duty employment status where the officer will be covered as to liability and/or workers compensation insurance. They also sued and won the right to bargain and represent everyone on the department except for two people.

As Chairman of the Oklahoma State Legislative Committee, P.D. has headed up the passage of “Plan B,” a retirement program designed to boost retirement payments, and SB 1173, a Binding Arbitration Bill which was the first and most important labor bill to be passed in 22 years. These are only a FEW of the too numerous to mention positive accomplishments since P.D. Taylor has around.

P.D. is a graduate of Puntnam City High School in Oklahoma City and has an Associates Degree in Police Science and 100 accredited hours towards his Bachelor’s in Criminal Justice. He has been the local FOP lodge president for 12 years, State FOP Member of the Year and Local FOP Member of the Decade.

To P.D. Taylor: We, the members of Oklahoma City Lodge 123 and officers of the Oklahoma City Police Department, along with members of the Oklahoma State Lodge, wish to thank you tremendously for all the hard work and dedication you have given to us. And to Carolyn and the girls, thanks for letting us have P.D. all those evenings and weekends, for all those dinners, school programs and open houses he has missed to help us get improved benefits and working conditions. P.D., your leadership will never be forgotten.