Law enforcement officers and other emergency responders often themselves in harm’s way to protect the public and ensure the safety of the innocent. Too often these heroes are called upon to make the ultimate sacrifice.

On this episode of the Blue View, National FOP President Patrick Yoes sits down with a remarkable young man, Zechariah Cartledge, the founder of Running 4 Heroes. Joining them is Chad Cartledge, Zechariah’s father and CEO of Running 4 Heroes. Zechariah has always had a passion for running. He also has a deep respect for law enforcement officers and other emergency responders. At the age of 7, Zechariah began competing in various 5k events around the community. It was at this point Zechariah decided to combine these passions to help raise funds to support the families that lost a hero.

Zechariah, who is fan favorite throughout the law enforcement community, started Running 4 Heroes in 2019 when he was 10 years old. The organization supports injured First Responders, K9’s, and families of fallen first responders and also honors them with a 1-mile run. Since 2019, Running 4 Heroes awarded more than $600,000 in funding to their various missions. They also conducted more than 1,300 mile runs in honor of fallen heroes. 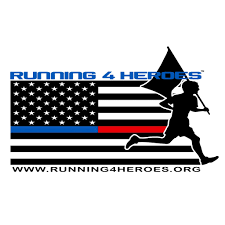 Running 4 Heroes started with a kid, an appreciation for our First Responders, and a mission to raise awareness and funds for those fallen in the line of duty. Zechariah Cartledge was born with the gift of running.  He was raised with an appreciation for First Responders and all they do for the community.  As he grew older, Zechariah decided to help the families of our fallen First Responders in a meaningful way.  Encouraged by the mission and vision of the Tunnel to Towers Foundation, Zechariah began his journey raising funds for those families by running.

In 2019, Running 4 Heroes officially became a non-profit 501(c)(3).  Zechariah runs one mile for every First Responder who makes the ultimate sacrifice in the line of duty.  He wants to honor those who gave up their life so we may live in a better world.