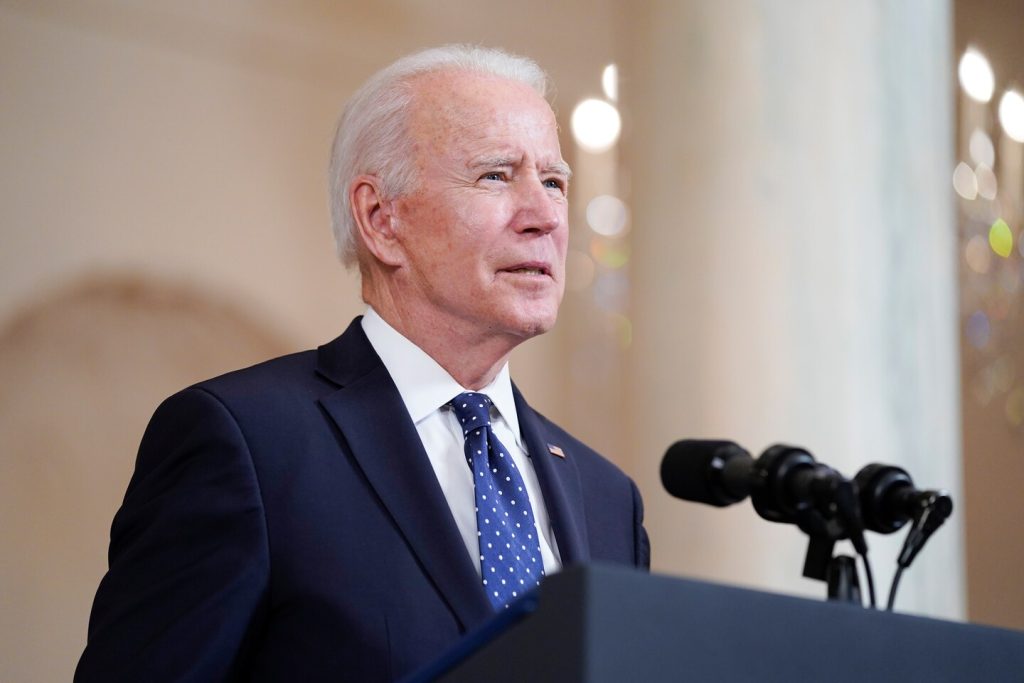 The Biden White House is struggling to reshape an executive order on police accountability three months after a leaked draft drew sharp opposition from law enforcement groups, putting the initiative at risk at a time when violent crime is rising and civil rights groups have expressed frustration over the pace of reform.

Police organizations said they remain in talks with Biden’s domestic policy adviser, Susan Rice, and other senior aides. But nearly two years after the police killings of George Floyd, Breonna Taylor and others sparked nationwide protests and demands for change, the White House has offered no timeline for the release of the order or details of what it might include.

The parties have reached general agreement on some key issues, including creating national standards for the accreditation of police departments and a decertification registry of officers who commit violations, said Jim Pasco, executive director of the Fraternal Order of Police. Those changes are aimed at boosting accountability by ensuring basic policing standards across the country and limiting the ability of bad officers to get jobs elsewhere.

But the most contentious questions remain unresolved — such as whether the White House would call for stricter use-of-force standards or changes to qualified legal immunity for officers, which protects them being sued as individuals over alleged misconduct. Law enforcement officials also have opposed efforts to make federal grant funding for local police departments contingent on those departments adopting specified reforms, Pasco said.

The White House and police groups acknowledged that the president cannot change qualified immunity through executive power. But calling publicly for changes could help mobilize public support and pressure on lawmakers.

The relatively slow-moving process — more than six months after President Biden promised to pursue executive action — comes as the White House seeks to signal support for police amid a two-year surge in gun violence and homicides, but also to reassure critics of policing that Biden wants to improve training and root out misconduct.

Facing sharp criticism from Republicans on public safety, Biden proposed $30 billion in new law enforcement funding in his fiscal 2023 budget request, following a State of the Union address in which he pointedly reaffirmed his rejection of the “defund the police” movement. Policing groups have noticed the recent attentiveness from Biden, who long boasted close ties to law enforcement.

At the same time, Biden’s stance has alarmed civil rights leaders, who fear that the administration’s urgency around police reform is fading as the midterm elections approach this fall. Since the collapse in Congress last year of the George Floyd Justice in Policing Act — which would have ended qualified immunity, made it easier to prosecute officers for misconduct and limited police use of force — advocates have looked to the White House and the Justice Department to take bold action.

“We think it would be bad practice and bad policy if their perceived political vulnerabilities turn into less of an appetite to seriously approach these systemic issues in our criminal justice system,” he said.

The White House believes public concerns about crime have complicated the political debate, according to law enforcement officials who have spoken with Biden aides. In June 2020 — at the height of the protests after Floyd’s death in police custody — about a quarter of Americans said they wanted less money spent on policing, compared with about 31 percent who called for more spending, according to the Pew Research Center. By last fall, those wanting reduced funding dropped to 15 percent, with 47 percent calling for more, Pew found.

“He’s trying to do this in the midst of a 25-year-high spike in the crime rate,” Pasco said of Biden’s efforts at police reform. “And you’re not going to ‘civil rights’ your way out of it.” In January, police groups and congressional Republicans denounced a leaked 18-page draft of the executive order that cited “systemic racism” within the criminal justice system. The White House rushed to do damage control. Pasco said one Biden aide has suggested that a revised version of the executive order could be completed for Biden’s approval by May, a month that includes National Police Week and also marks two years since Floyd’s death. But Pasco called that target unlikely.

Biden aides said launching the order is a priority but offered no timetable in an interview with The Washington Post on Wednesday, cautioning they are not in the final stages of presenting a proposal to the president. When pressed, they declined to say whether they hoped to get it done before November’s midterm elections.

The aides said Biden has been consistent on the need to both provide resources to law enforcement and hold officers accountable for misconduct. And they pointed to a series of Justice Department actions — including pattern-or-practice investigations into police departments in Minneapolis, Louisville and Phoenix, and new limits on the use of chokeholds by federal officers — as examples of the administration’s efforts to use federal power to force reforms.

“These are not small things,” said Chiraag Bains, deputy director of the White House’s domestic policy council for racial justice and equity.

Bains cautioned that the president’s legal authority to mandate changes for local policing through executive power is narrow, and said his team is working to determine what can be done within those limitations. “That would include working to establish practices, standards and frameworks to reflect the way in which federal law enforcement can be a model,” he said. “And building on and lifting up the best practices we’ve seen in the field, often from state and locals. That’s what an executive order can do.”

Another Biden administration official, speaking on the condition of anonymity to discuss private conversations, acknowledged the political reality that the public’s perceptions of rising crime — and Republican efforts to portray Democrats as weak in addressing it — could erode support for sweeping efforts to limit when and how police can use force on the job.

Pasco said he does not know whether the White House will eliminate the “systemic racism” language that sank the draft executive order. But he said the situation has created a bind for Biden aides: Leaving it in would outrage police, but taking it out would anger civil rights groups.

In a meeting at the Justice Department last week with more than two dozen civil rights leaders, Attorney General Merrick Garland sought to reassure them, saying that restoring and maintaining public trust in law enforcement is crucial to building effective crime prevention strategies.

Last month, Garland appeared at the conference of National Organization of Black Law Enforcement Executives in Baton Rouge to announce a new Justice Department effort to encourage police departments to enlist in a “collaborative reform initiative.”

In some respects, however, the voluntary program reflected the limits of the federal government’s power, with the Justice Department constrained in the number of expensive and time-consuming pattern-or-practice investigations it can pursue.

“What you’re seeing is what you’re likely to get,” Damon Hewitt, president of the Lawyers’ Committee for Civil Rights Under Law, said when asked if Justice officials outlined any new strategies in the meeting with activists. The civil rights division, he added, is “not getting all they want [in funding] and they’re stretched thin.” 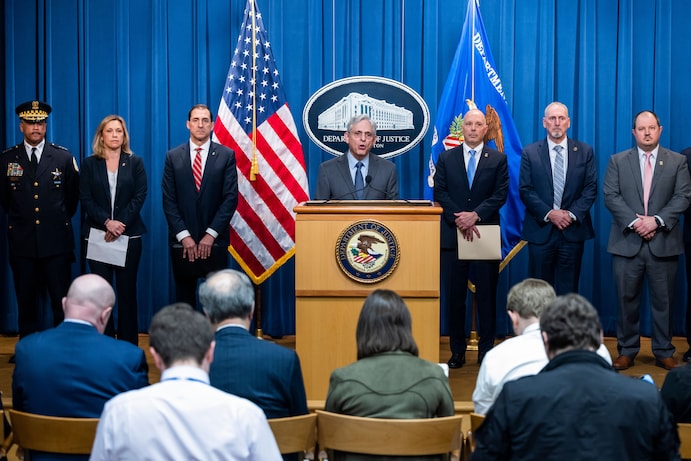 Henderson praised the Justice Department’s efforts on police reform, including the successful federal prosecution in February of three former Minneapolis officers charged with violating Floyd’s civil rights. But he added that “the passage of the George Floyd bill would have given the department more tools.”

Justice Department officials declined to comment on the specifics of the meeting, which was also attended by Deputy Attorney General Lisa Monaco and Associate Attorney General Vanita Gupta, as well as Kristen Clarke, the head of the civil rights division.

“Trust in law enforcement is a cornerstone of our work to keep communities safe,” Gupta said in a statement. She said the department is using funding, training, technical assistance — as well as reviewing data and research on officer accountability and launching systemic reviews of police departments when necessary — to help build that trust.

Georgetown University law professor Christy Lopez, a former Justice Department official who led its investigation of the Ferguson, Mo., police in 2014 and 2015, said the atmosphere for police reform is still fundamentally different from where things stood before Floyd’s death.

While some cities reversed course amid rising gun violence, pushing for more police funding, “you have many more jurisdictions that passed new laws related to accountability for police or related to establishing alternatives to respond to mental health calls,” Lopez said. “I’ve been doing this work for a long time, and I’ve never seen anything like the breadth and the depth of change since Floyd.”

Police leaders said they are not surprised at Biden’s recent “fund the police” rhetoric, noting that his budget request last year also contained a significant increase in law enforcement spending.

“The president was very clear that he’s never supported defunding police,” said Orlando Rolón, the police chief in Orlando. He acknowledged the need to implement reforms, but “if there is a balance to be created, it cannot be at the sacrifice of putting more boots on the ground,” Rolón said. “We have to have the resources to be proactive.”

Wexler of the Police Executive Research Forum said proposed funding boosts for both the military and police are the strongest he has seen from a Democratic administration in decades. “I don’t think the administration is in the same place today as when they started,” Wexler said. “The ground has shifted. If you talk to a mayor in any city in this country, they’re worried about crime and worried about hiring cops.”

Last October, shortly after the George Floyd policing bill failed, Pasco received a surprise call at home from Biden, who has known him for years. The two spoke for about 15 minutes, Pasco said, parsing the state of reform efforts, the spike in violent crime and police morale.

“He was picking through issues like the encyclopedia. He went through things from A to Z,” Pasco recalled. “I’m answering him, and I’m thinking to myself, ‘You know, he doesn’t even have anybody on his staff who has anywhere near the depth that he has on policing, or the insight into how police officers think, and how they react to things.’ ”