The United States Senate Committee on Commerce, Science, and Transportation has announced that it will be convening tomorrow on March 3rd, 2022 to consider the nomination of Gigi B. Sohn to be a Commissioner of the Federal Communications Commission (FCC).

The Fraternal Order of Police has voiced numerous objections to this nomination and continues to oppose Ms. Sohn due to the overwhelming and substantial concerns regarding her views and past history. Gigi B. Sohn’s social media, public policy stances, and employment history has indicated serious animus towards law enforcement officers and the rule of law. In this document we have included some of the more prominent examples of this anti-police sentiment and other troubling pieces of evidence. Please review the following examples of this sentiment in the below document.

Lastly, we believe that a vote to favorably report Ms. Sohn to the Senate Floor tomorrow is a vote against the hard-working men and women of law enforcement that are simply trying to do their job and protect the public. Is this the type of nominee that your constituents want representing them on the Federal Communications Commission? The Fraternal Order of Police continues to oppose this nomination and we thank you for your consideration before the vote. 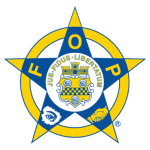 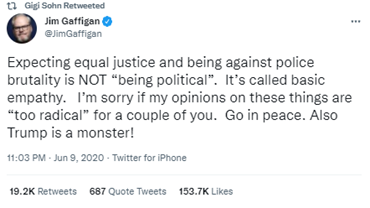 In May 2020, Sohn Liked a Tweet Noting “Funny How One Bad Protester Labels the Whole Movement, But A Few Bad Cops are Never Supposed to Represent All Cops.” (Sohn Twitter Profile, Accessed 1/18/22)

In August 2020, Sohn Retweeted A Post Noting “While We’re Still Talking About the @Nba: A Reminder That Billionaire @Tomgores, Owner Of The @Detroitpistons, Robs Black and Brown Families to Fund Police.” (Sohn Twitter Profile, Accessed 1/17/22) 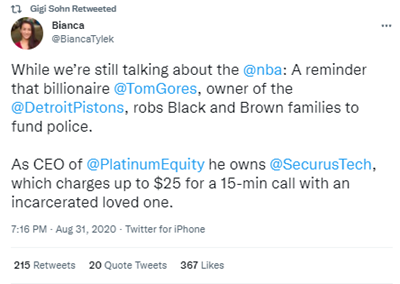 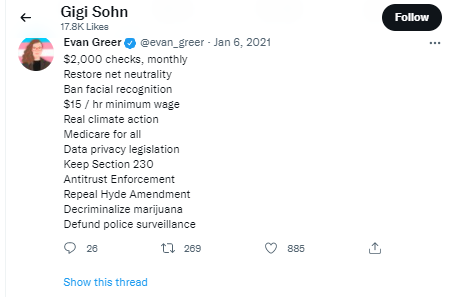 In June 2020, Sohn Liked a Tweet from AOC Calling for Defunding of the Police. (Sohn Twitter Profile, Accessed 11/8/21) 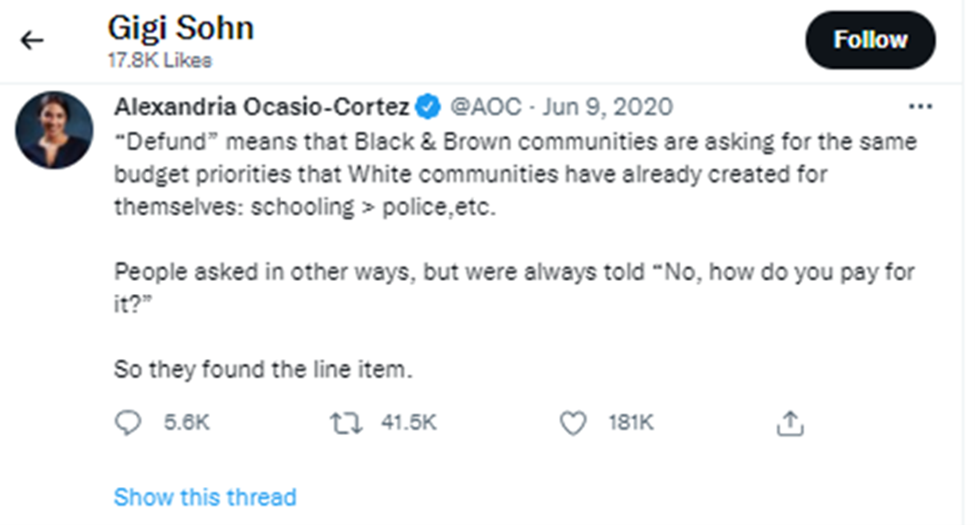 Sohn Retweeted and Liked a Tweet from AOC Criticizing Attacks On Socialism and Defund the Police Noting “When It Comes To “Defund” & “Socialism” Attacks, People Need to Realize These are Racial Resentment Attacks. You’re Not Gonna Make That Go Away. You Can Make it Less Effective.” (Sohn Twitter Profile, Accessed 11/8/21) 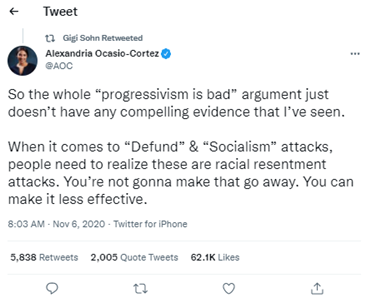 In May 2020, Sohn Liked a Tweet Criticizing Police Who “Stood Like the Goddamn Queen’s Guard When White Assholes W Guns Storm the State Capitol Protesting HAVING 2 WEAR A MASK IN A PANDEMIC.”  (Sohn Twitter Profile, Accessed 11/8/21) 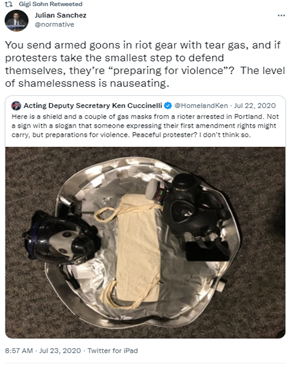 In June 2020, Sohn Liked a Tweet Calling for Police Reforms Such as an End to Qualified Immunity and Militarization of The Police. (Sohn Twitter Profile, Accessed 11/8/21)

In June 2020, Sohn Retweeted a Post Criticizing Police for Investigating the Associations of Protestors and Further Noting “Police Surveillance Must Be Limited to Prevent 1st and 4th Amendment Violations.” (Sohn Twitter Profile, Accessed 1/17/21) 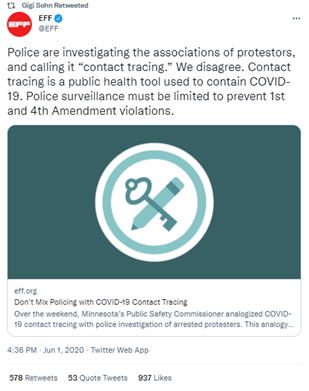 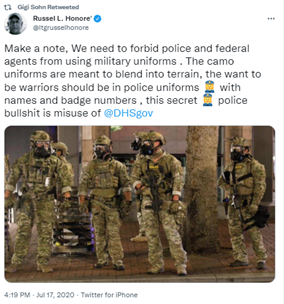 The Equal Justice Initiative Claims Law Enforcement Currently Exists as a Means to Perpetuate Racism in America. “The system of policing and incarceration evolved as a way to maintain racial hierarchy after the Civil War. We will eliminate the scourge of police violence and abuse only if we address the centrality of racial injustice and inequality in America. Because the United States did not commit to racial equality, slavery did not end in 1865; it evolved into convict leasing and de​​cades of racial terror lynchings. Without an explicit commitment to ending racial injustice and the narratives that sustain it, law enforcement and other forms of racial control and mistreatment will continue. Many existing social service institutions already operate in ways that perpetuate racial inequality. Eliminating racism, rooting out white supremacy, and dismantling the racial hierarchy that persists as a legacy of our history must be an explicit and central goal of any meaningful conversation about policing and the treatment of Black people in this country. Public safety and public health in America cannot be advanced without confronting racism.” (“Policing In America,” Equal Justice Initiative, Accessed 6/5/21)

Nonprofits run by Sohn have objected to several measures that would aid law enforcement.

The Electronic Frontier Foundation Touts “Big Victories” In Their Fight for Encryption, A Core Tenet of Their Organization. “At EFF, we talk a lot about strong encryption. It’s critical for our privacy and security online. That’s why we litigate in courts to protect the right to encrypt, build technologies to encrypt the web, and it’s why we lead the fight against anti-encryption legislation like last year’s EARN IT Act. We’ve seen big victories in our fight to defend encryption. But we haven’t done it alone.” (Electronic Frontier Foundation, “On Global Encryption Day, Let’s Stand Up for Privacy and Security,” 10/21/21)

The Electronic Frontier Foundation Pressured Amazon’s Ring into Allowing End-To-End Encryption, Specifically Complaining About the Company’s Collaboration with Law Enforcement. “Ring’s relationship to law enforcement has long been a concern for EFF. Ring now has over a thousand partnerships with police departments across the country that allow law enforcement to request, with a single click, footage from Ring users. When police are investigating a crime, they can click and drag on a map in the police portal and automatically generate a request email for footage from every Ring user within that designated area.What happens when Ring users refuse to share that footage, without end-to-end encryption, has been a major concern. Even if a user refuses to share their footage, police can still bring a warrant to Amazon to obtain it. That means users’ video and audio could end up contributing to investigations they wish they had not facilitated—like immigration cases or enabling police spying on protests—even without the users knowing this had happened.” (Electronic Frontier Foundation, “Amazon Ring’s End-to-End Encryption: What it Means,” 2/2/21)

In A Blog Post, The Electronic Frontier Foundation Attacked Christopher Wray After He Testified That End-To-End Encryption Frustrated the FBI’s Ability to Prosecute the January 6th Attacks. “Federal law enforcement has been asking for a backdoor to read Americans’ encrypted communications for years now. FBI Director Christopher Wray did it again last week in testimony to the Senate Judiciary Committee. As usual, the FBI’s complaints involved end-to-end encryption employed by popular messaging platforms, as well as the at-rest encryption of digital devices, which Wray described as offering “user-only access.” The FBI wants these terms to sound scary, but they actually describe security best practices. End-to-end encryption is what allows users to exchange messages without having them intercepted and read by repressive governments, corporations, and other bad actors.” (Electronic Frontier Foundation, “The FBI Should Stop Attacking Encryption and Tell Congress About All the Encrypted Phones It’s Already Hacking Into,” 3/8/21)

The Electronic Frontier Foundation Backed an Amendment That Would Ban Federal Agencies from Inserting Backdoors to Weaken End-To-End Encryption. Everyone online relies on strong encryption for our privacy and security. But federal law enforcement officials keep attacking encryption, seeking backdoor access that would allow the government to scan our messages. This year, we have a chance to fight back. Rep. Tom Malinowski (D-NJ) and Rep. Peter Meijer (R-MI) have proposed to ban federal funds from being spent on software or hardware that creates security vulnerabilities or weakens end-to-end encryption. Tell your Representative to back the Malinowski-Meijer language in an upcoming appropriations bill. (Electronic Frontier Foundation Action Center, “Speak Up For Strong Encryption Rules in Congress”)

Public Knowledge Opposed the Anti-Child Pornography EARN IT Act Due to Provisions That Would Discourage End-To-End Encryption. “Many platforms could do more to prevent the exploitation of children on their services. We are open to legislative ideas that ensure that Section 230 continues to serve its intended purpose, which is to promote legitimate free expression, as well as proposals that protect children and give law enforcement the tools and resources, they need to prosecute cases. However, we cannot support a bill that could discourage the use of privacy-promoting technologies like end-to-end encryption.” (Public Knowledge, “EARN IT Act Could Threaten User Privacy and Security,” 3/5/20)

EFF Published Their Concerns Regarding NG911 Deployment Outlined in Their Comments to The FCC On Their Website. “In comments filed with the Federal Communication Commission today, EFF outlines the critical privacy concerns at play in Next Generation 911: medical privacy, locational privacy, and anonymity.” (Electronic Frontier Foundation, “A Privacy Emergency: Consumer Rights at Risk in Next Generation 911,”, 3/14/11)

In A Statement Before the Senate Subcommittee on Communications, Technology, And The Internet, Public Knowledge Senior Staff Attorney Jodie Griffin Praised The FCC For “Creating A Framework For Next Generation 911 Services” That Ensures Consumers Are Able To Contact Emergency Services. “When the traditional architecture of the PSTN no longer exists, it is crucial that consumers are able to contact emergency services when they need it most. The moments in which the public relies upon emergency services like 911 are literally life-or-death, and it is crucial that policymakers implement rules that maintain the public safety components of the phone network. To its credit, the FCC has already begun the process of creating a framework for Next Generation 911 services, but these issues must also be considered in the broader context of the overall shift of the PSTN to new technologies.” (“Preserving public safety and network reliability in the IP transition,” 6/5/14)

In 2015, EFF Cited “Privacy Concerns” Of Wireless Users in Response to FCC Enhanced 911 (E911) Regulations. “The roadmap also poses privacy concerns for anyone using a stationary wireless device, be it a Wi-Fi router, a set-top cable box, or even a smart thermostat. That’s because carriers want to create something called the National Emergency Address Database (NEAD), which would match the Wi-Fi and Bluetooth MAC addresses of stationary devices to physical street addresses (and even apartment, suite, or floor numbers). This would enable the carriers to take advantage of the same sort of indoor location technology that companies like Google, Apple, and Skyhook already use, which use your phone’s Bluetooth and Wi-Fi antennas to scan for nearby fixed devices, and then match those MAC addresses to a database to determine your precise location.” (Electronic Frontier Foundation, “Dear FCC: Enhanced 911 Location Services Could Endanger Americans’ Privacy,” 1/27/15)

In 2018, EFF Repeated User Privacy Concerns Regarding E911 Regulations in a Post About the Wireless Emergency Alert (WEA) System. “This isn’t to say that there aren’t serious privacy issues with the E911 system… The E911 standard requires that a mobile device be able to send its location, with a high degree of accuracy, to emergency responders in response to a 911 call. While this is a good idea in the event of an actual crisis, law enforcement agencies have taken advantage of this technology to locate and track people in real time. EFF has argued that this was not the intended use of this system and that such use requires a warrant.” (Electronic Frontier Foundation, “There are Many Problems With Mobile Privacy but the Presidential Alert Isn’t One of Them,” 10/4/18)

In 2021, Public Knowledge Submitted Its Support of The FCC’s Initiative to Utilize The 4.9 GHz Band for Commercial and Non-Public Safety Uses. “The record on balance strongly supports the Commission’s dual goals of promoting more intensive and cost-effective use of the 4.9 GHz band for public safety communications on a primary basis, while also authorizing commercial use on a secondary and opportunistic basis. Achieving this win-win outcome is squarely in the public interest. Doing so will revitalize the band for public safety use, improve broadband equity, develop the equipment ecosystem, and ensure the protection of current and future public safety operations from harmful interference.” (Federal Communications Commission, “Reply Comments Of New America’s Open Technology Institute And Public Knowledge,” 1/11/21)

Public Knowledge Suggested That The FCC Could Make 4.9 GHz Band Available To Assist In Emergency Communications Of Non-Public Safety Entities. “The FCC could also make the 4.9 GHz band available for emergency communications by non-public safety entities where needed. The needs of public safety could be safeguarded in a manner similar to FirstNet, which prioritizes communications by traditional public safety/first responder entities over those of other entities using the network.” (Public Knowledge, “Harold Feld’s Testimony for the FCC Network Resiliency Hearing,” 10/25/21)