Qualified immunity protects state and local officials – firefighters, teachers, school administrations and more – from civil liability for following the rules and regulations set forth by the laws they are sworn to uphold. Law enforcement officers who objectively were acting in good faith under the color of law are protected by qualified immunity. 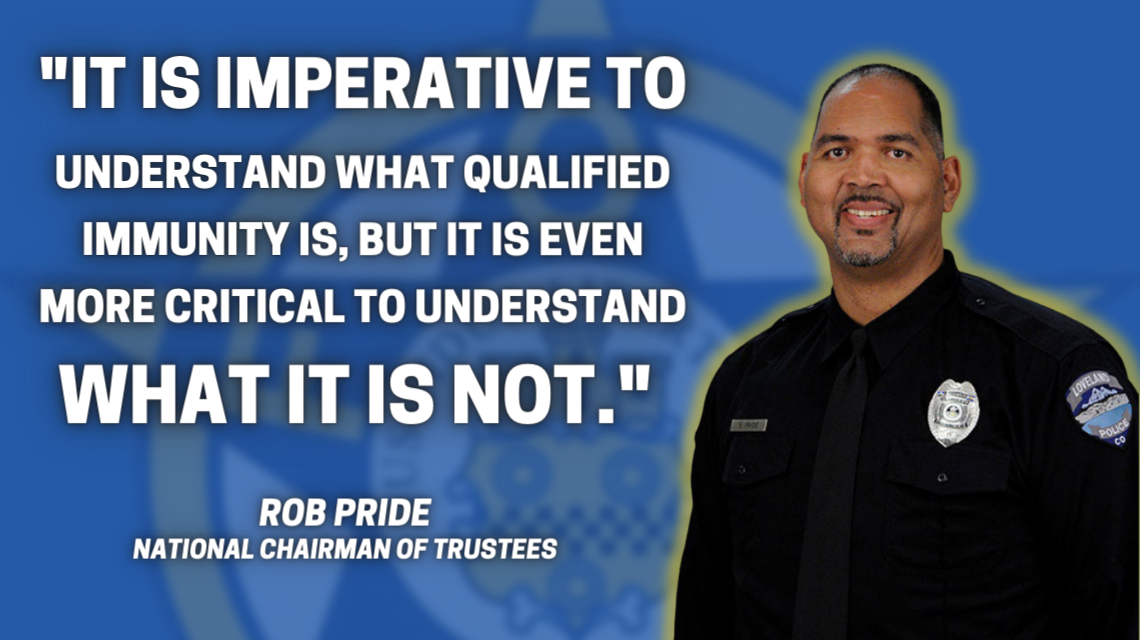 As we have seen recently, the U.S. Supreme Court continues to uphold qualified immunity. The doctrine in its entirety has held firm and withstood recent political and legal debates.

Some who favor revoking qualified immunity speak about law enforcement officers needing to have “skin in the game.” The fact is: Our nation’s officers already have skin in the game, both literally and figuratively. They are constantly being faced with making split-second, life-changing decisions while defending and protecting the lives of others, or sometimes even their own.

The attacks on qualified immunity have caused instability throughout the law enforcement profession. Securing the future of policing and making a true change can only happen by having the ability to attract the best and brightest young, forward-thinking recruits. The possibility to face complete financial ruin even when reasonably believed to have acted under the color of law will not draw the much-needed young people to pursue a career in law enforcement.

Recruitment numbers were suffering before the national debate began on qualified immunity, and they are even worse now. Officers are leaving the profession in droves – with no end on the horizon.

The reality is that people are not lining up at the doors to become police officers today. Threats of stripping qualified immunity from law enforcement are not helping.

In Colorado, through internal Fraternal Order of Police communications and other reports, we know our state’s officers are retiring early, leaving the profession altogether or moving to other states to continue their careers. This is largely because of the enactment of the Colorado Senate Bill 217, which eliminated qualified immunity for police officers. A vast majority of the agencies in Colorado are experiencing the struggles of being understaffed and not able to retain qualified applicants.

It is important to note that the Colorado FOP worked collectively with legislators to enact some beneficial provisions in Colorado Senate Bill 217:

The Colorado FOP will continue discussions with lawmakers to improve policing and trust within our communities.

The policing profession is far from “normal” and cannot be viewed the same as other lines of work. There are few professions where an employee can perceive a dangerous situation in the workplace and still be required to enter that environment and act. Most professions provide employees to do the total opposite and avoid the dangerous situation.

Yet, if our police officers refuse to respond just because danger is present, then that can be categorized as a dereliction of duty and a failure to hold their sworn oath.

We must continue to allow protections for law enforcement officers thrust into these types of situations and act reasonably based on law, training and common sense.

If the attacks on qualified immunity continue, our nation will still struggle to recruit the brightest people and retain the good, experienced men and women of law enforcement needed to train the recruits.

States across the country must evaluate the consequences that come with revoking qualified immunity and ask: Is this effective police “reform,” or will this have long-lasting negative impacts that will affect the safety of our communities?

Sgt. Rob Pride is the National Fraternal Order of Police Trustees Chairman and the Colorado Fraternal Order of Police National Trustee. Pride, a Colorado native, has worked in law enforcement for over 25 years. Pride’s Op-Ed was first published on 26 November 2021 in USA TODAY as part of a series by the USA TODAY Opinion team examining the issue of qualified immunity.